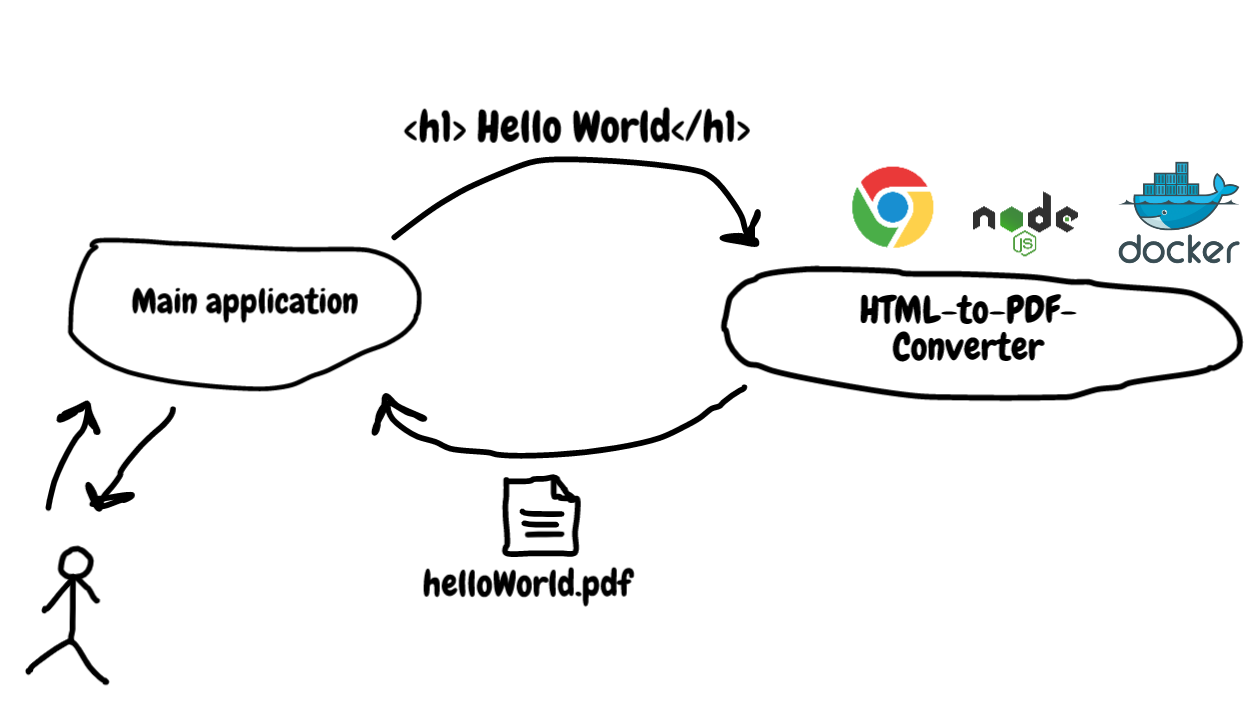 In our team we have struggled to find a simple but yet complete solution to design and generate reports and protocols for one of our customers business applications. Fortunately with the help of Docker, Node.js and Chrome we found a solution.

We have for some time been using an old version of Telerik Reporting. Although Telerik Reporting is a powerful framework packed with loads of functionality for building reports, it has brought us some problems from time to time.

Our biggest struggles so far:

Our new idea – HTML to PDF

We tried to find a way to create reports and protocols in a way that we could use our existing knowledge of making templates and that solves our biggest struggles. What straightly came to our mind was HTML. As the developers in our team are familiar with web development, HTML is a markup language that all have been working with. It’s a markup language easy to read and it also solves all our struggles.

As we thought that we may have found our solution there were still some few concerns that we needed to deal with. How do we turn HTML into PDF, and what about page breaks and pagination?

We thought straight away that we could use some open source library to deal with the conversation from HTML to PDF. But after hours of googling and testing we found out that this is probably not the easiest task to manage. As most of the free open source libraries that we found didn’t make the conversion in the way that pleased us. One thing that seemed difficult to sort out was preventing page breaks appearing in the middle of a sentence. Those libraries that seemed to do a sensible conversion cost more money than we could motivate.

The browser Google Chrome is solving our concerns. Then we found out that others have been using the browser Google Chrome to solve this type of problem. Chrome does an excellent job of converting web sites to a PDF-document. Chrome even does have support for preventing unwanted page breaks and pagination and so on. So we thought, why don’t we just use Chrome for making the conversion.

To implement the idea with the browser Google Chrome as the conversion engine we wanted to package the whole functionally as a microservice. As we knew that we in some way needed to have Chrome installed we knew we didn’t have the possibility to install Chrome directly to our existing servers. This is because we don’t actually have any servers as we run the “main” application on a PAAS platform in Azure (Platform as a Service). But honestly we didn’t want to make infrastructural changes to the core application either.

Docker allows us to create a small scale image with everything that we need already predefined and installed. Like Chrome, Node.js and the few lines of code managing the HTML to PDF conversion. Docker also runs quite simple on Azure which is a provider that we already use in the project.

Well, we could have been using whatever programming language we wanted, but as we just needed some few lines of code it was hard to motivate say C# over the simplicity of managing this problem with pure JavaScript. We ended up using Express.js as the web server framework. A JavaScript library called Puppetier was also used to simplify the comands sent to Chrome. We also did run Chrome in the “Headless” mode as we weren’t interested in actually opening a browser.

Drop us a line